Jiří Dědeček together with Edyta Tabor and Štěpán Sklenák from J. Heyrovský Institute of Physical Chemistry of the Czech Academy of sciences found a unique way to turn methane into methanol, for which they received the Czech Head Invention Award. Using the IT4Innovations supercomputers in their research, they computationally predicted results, which they eventually confirmed experimentally. They received 32,458,000 core hours of IT4Innovations computational resources for their research within six Open Access Grant Competitions.

In simple terms, zeolite is leaky quartz, and its uniqueness lies in the fact that silicon and oxygen atoms form an interconnected structure of channels and cavities that accommodate smaller molecules. If reaction centres are present in the channels, zeolites become ideal material for use in catalysis.

The team of scientists from the Department of Structure and Dynamics in Catalysis of J. Heyrovsky Institute of Physical Chemistry has been intensively researching the use of zeolites for catalysing redox reactions in recent years. One of them is the transformation of methane into methanol. Given the low methane reactivity, this is currently one of the biggest challenges in heterogeneous catalysis, which is drawing immense attention. Methane is the main component of natural gas and is therefore cheap and readily available. Unfortunately, transporting and storing gas is a lot more complicated than in the case of oil. Plus, we can only use it en masse as fuel.

The use of methane in chemical production is still possible only through indirect, energy, technology, and economically intensive processes. The final price of the resulting product, e.g., methanol, is then generally unacceptable. However, methanol can be widely used as a raw material for chemical production or as an alternative fuel. The direct oxidation of methane into methanol with molecular oxygen is a way to significantly reduce the cost of methanol production, bringing us closer to obtaining the technology to produce cheaper fuels, as well as many other industrially usable products.

Until recently, there was no catalyst to convert methane directly into methanol with molecular oxygen efficiently enough. The team of the Department of Structure and Dynamics in Catalysis has created and described the structure and reactivity of new, unique types of reaction centres that can activate oxygen in a previously unknown way - to split it. This can be accomplished by two transition metal cations (e.g., iron) opposite each other, but significantly further apart than in enzymes (at about 7 ten-millionth of a millimetre), at room temperature. This unique system has been successfully used to create methane-to-methanol oxidation systems, as a possible basis for methane technology.

In addition to the ability to split molecular oxygen and oxidize methane into methanol even at laboratory temperature, the new method exhibits another unique property. Methanol produced by oxidation of methane is also spontaneously released into the gaseous phase at laboratory temperature. This is a very substantial advantage over other catalysts capable of selectively oxidising methane with molecular oxygen, where, in addition, it is necessary to use water vapour to release methanol. This then leads to the destruction of active centres and, consequently, to their low level of activity that makes them technically useless in practice.

For more information about the research, see http://web.jh-inst.cas.cz/~sklenak/stepan/publ/66.pdf 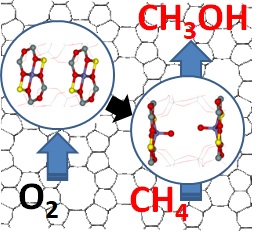 The description of direct oxidation of methane (CH₄) into methanol (CH₃OH) with molecular oxygen (O₂) Image: Jaroslav Heyrovský Institute of Physical Chemistry of the CAS 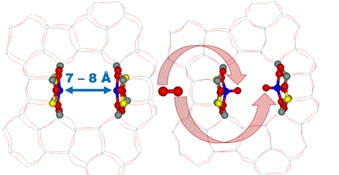 The description of oxygen split at room temperature Image: Jaroslav Heyrovský Institute of Physical Chemistry of the CAS